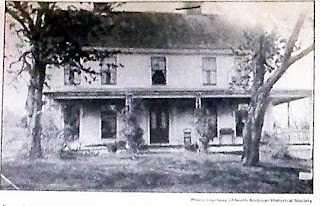 The Jacob Rea House gives a glimpse of Valley's history

Two hundred sixty years of local history are visible at the Jacob Rea farm on Rea Street in North Andover. Originally part of a land grant from the King of England to the Engels brothers, the first house was built here in 1739. The east wing of the present house (not visible in the photograph) is probably part of that original house. The main house, shown here, was constructed around 1760. Note that the center chimney of earlier times has been divided into two chimneys, each serving two large rooms on the first and second floor.

This spacious farmhouse is sheltered by a hill behind it and overlooks outbuildings to the south. There are two front doors, on the easterly and southerly sides of the building. Dr. Foster, an early owner of the farmhouse, modernized it in the 1850's by adding the Italianate touches. Small multi-paned windows were replaced by larger ones with few panes. First floor windows extended toward the floor. Brackets were added around the windows, as was a curved front door, and the veranda - complete with posts decorated with tracery - on the east and south sides of the house. Adding Italianate details to New England houses was the fashionable thing to do in the mid-19th century. Rumor has it that the cost of remodeling the house caused Dr. Foster to go bankrupt. The Rea family, for whom the house is now known, apparently purchased the farm from a bank. They also owned other farms closer to the Salem Turnpike (Rte 114).

Until 1958, the farm was the only house on Rea Street. If you drive there you will see that the street goes right through their farm yard. The Reas still own the land, where side-by-side one may find excavating equipment and farm machinery.