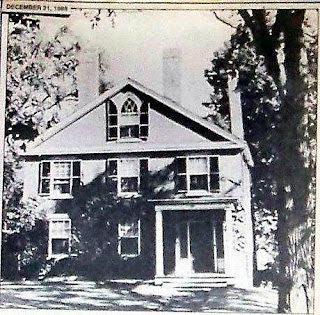 Rebecca Haseltine Emerson and her husband founded a school for girls in Wethersfield, CN. She contunued to run it for 15 years after his death, but in the 1840's she came to Bradford to build a house across from the campus of the Bradford Academy (later Bradford College), begun by her sisters.

What did she build? A straightforward brick dwelling whose charm comes from its balance and proportions. It looks very similar to houses built in the area during the previous 100 years. But its differences speak to the changes that century had brought.

The most obvious change is the direction of the roof pitch. Here the gable end of the house faces the street. The triangle outlined with fascia boards is intended to remind the viewer of classic Greek temples and ancient city states such as Athens, the precursors of American democracy. The other differences are due to technological advances. These included larger windows since manufacturing glass had become easier, and instead of the massive Colonial chimneys this house has several small chimneys, which serve wood and coal stoves as well as fireplaces. And the arched window in the peak is a sign that the builders had the skill and time to create a little frivolity, as well as being the latest style.

The house is known as the Hatch House for the family who lived here from 1857 to 1937. It also served as a dormitory for Bradford College. When you drive by, note the fine Greek Revival front door with its many paned side lights, hardly visible here beneath the shadow of the porch.

Bradford is part of the city of Haverhill. It is on the south side of the Merrimack River. Haverhill is on the north side.