Farmhouse moved but remained the same

In 1905, George Franklin Sargent Webster - at the plow in the photograph - and his wife - on the far right - posed on their lawn for this photograph which was made into a postcard.

The house behind them had been built 2 years earlier in honor of their marriage. The original farm house, a cape, was moved up the street to 1121 Broadway. The style of the house, Colonial Revival, contrasts with the barn, built about 1800. Both use the same boxy forms but put them together in very different ways. The facade of the barn is a flat surface with windows and doors placed in patterns determined by use and proportion - the door is square, large enough for loaded wagons, while the windows are centered on their spaces. The only hint of style is in the roof overhang and the return of the eaves.

The end wall of the new house repeats the lines of the barn. But the front of the house exuberantly breaks the flat plane with bay windows and columns. The roof is broken by the front facing gable whose steep overhang returns at the eaves to become the cornice for pilasters with elaborate capitals. Compare that to the barn's simple eaves and corner boards.

At the front door the flat pilasters become the background for round columns and their architrave - the band with its cornice above the front door. Again the flat two dimensional wall is pulled into three dimensions.

The house was originally yellow with white trim. Today it is dark brown. and those bits of trees in the photograph have grown to tower over the house. 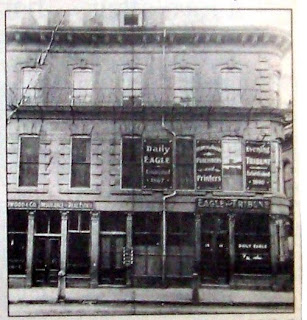 Four years ago the people at the Eagle-Tribune gave me a chance to write about architecture in the Merrimack Valley. They didn't know if there would be an audience, or if I could meet deadlines. Nevertheless, they let me try. This column, the 100th, is to thank them for their support and encouragement.

305 Essex Street, at the corner of Lawrence Street, was the offices of the newspapers The Daily Eagle, The Evening Tribune, and the weekly Essex Eagle in 1890. Today the building's brick is exposed, but originally, as seen in the photograph, the brick was stuccoed to resemble cut stone, like buildings you would see in Florence or Rome - in other words, Italianate.

This building was designed to be seen from the street. The cast iron columns on the first floor allow large glass windows so merchants might display their goods to passing shoppers. Those columns, which could be as plain as the concrete filled steel columns in many basements, have bases, edges and flowering capitals, a treat for the pedestrian.
The fire escape becomes part of the ornamentation with its crossed railings. The eaves, embellished with brackets and mouldings signal the top of the office block. There is a 4th floor, but it is invisible to the pedestrian.
As can be seen in the photograph, its dormers are simple, without the variety of pattern seen in the walls of the lower three floors. So the massive eave line becomes the top edge of the building. 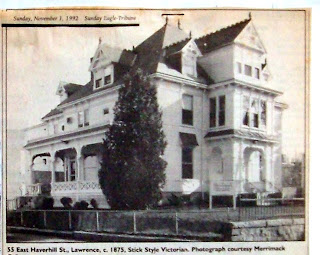 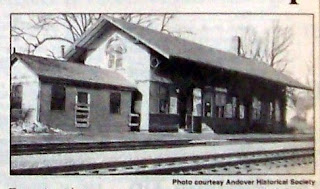 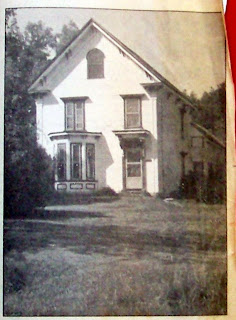 Labels: 1800-1850s, Haverhill MA, Italianate
Older Posts Home
Subscribe to: Posts (Atom)
Each "Sunday Drives" column was limited to 250 words, so when writing them I focused on explaining a few interesting elements from each building, instead of telling its complete history.