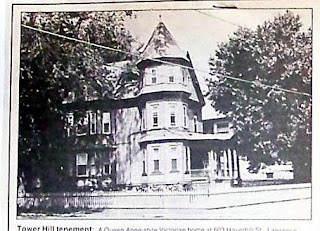 This is a tenement - a three story apartment house. But apartments are not what you think of when you approach the house at the top of the hill on Haverhill Street.

The first thing you notice is the tower with all its detail. And that is what the builders of Victorian architecture in the Queen Anne style wanted. They loved asymmetry - here there is not only a tower on one corner, but bay windows and a wrap around porch to catch your eye. Everywhere there is something to look at: the half round windows peeking through the roof, the porch columns with Ionic capitals, the foundation where the stones were not placed smoothly but turned to make a rough surface. The house is currently painted gray with brick red trim, but when it was built in the 1880's, it might have had as many as five different colors highlighting its trim.

It is unexpected to find a tenement in the fashionable Tower Hill neighborhood of Lawrence, so perhaps it was built for an extended family. Certainly its detail and size speak of time and money to build a gracious and fashionable home. Queen Anne builders loved to break up the flat surface of a wall with pattern - you find fancy cut shingles, clapboards and mouldings made into patterns, extra little roofs, and sun bursts. Usually the sun rays were at the top of the house, under gables, but here they are at the bottom, below the bay windows. The Queen Anne style was started in England by architects nostalgic over the craftsmanship of 150 years earlier, during the reign of Queen Anne ( 1702-1714). When the style was introduced in the United States at the Philadelphia Exposition in 1876 - and by pattern books showing the latest details - it was easily adapted and expanded upon by local carpenters to fit their own conditions. Queen Anne became a truly American style.