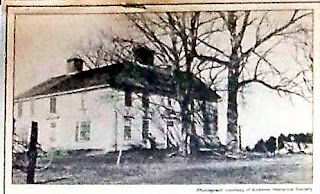 Historic farm started as half a house

In 1699, Hannah Blanchard married Stephen Osgood. Her father gave this land and his father gave the money for their first house. Originally it was only half a house, two rooms up and down, and a staircase. The door with the triangular pediment, and the part of the house to its left in this photo, are that original house.

Thirty years later, Hannah and Stephen's second son, Issac, inherited the farm. A captain in the French and Indian War, he wore a wig to remind people of this status. So in 1739, when he enlarged the house, he embellished it with both a triangular and a half-round pediment over the doors, and cornices (hoods) over the large windows. His expansion was really just the usual center chimney house set against the existing structure. The hip roof, not common in that day, was built to accommodate the intersecting roofs.

The original house had faced west, sited to the south of the road and highly unusual for those times. One theory is that the house may have been sited this way in order to stand over the well, which is still located under the floor in the dining room. There also appears to have been a door on the north side of the house toward the road. With the 1739 addition, the house faced west and south, with a view across the creek (which circles the knoll and winds over the meadows). But the visitor approaching down Osgood Street from Andover comes awkwardly to the back of the house.

Note that the two maple trees in the photograph will leaf out and shield the house from summer sun - shutters were also added in the 1900s. Since this photograph was taken, sometime in the late 1800's the house suffered a serious fire that destroyed the front door with its curved pediment. The scarred beams are still there.

Here's an interesting bit of trivia about the house - Jacob Osgood, son of Issac, invited James Otis, Revolutionary orator and lawyer, to convalesce at his home after a head injury. Mr. Otis lived there for two years and taught school. He was killed by lightening on May 23, 1783, while standing in the front door.