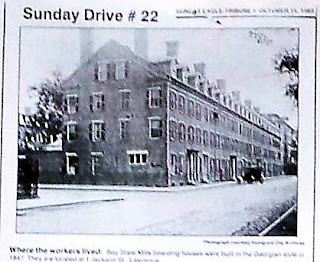 In 1850 these brick tenements beside the North Canal were considered an excellent example of worker housing.

The Sanitary Survey of Lawrence, commissioned by the Commonwealth of Massachusetts, allocated five pages to floor plans, rules of conduct for boarders, and the up-to-date sanitary system of the four model boarding houses of the Bay State Mills.

The buildings were simple brick town houses, attached side to side, having rearyards with sheds along the alley. Three stories high, 20 rooms large, with dormers in the attic, they were designed to house 36 boarders. These were mainly women, who lived two and four to a room.

The tenements' architecture was traditional: the rhythm of the doors and windows following the pattern established in Georgian England and carried to the United States before 1700. The only concessions to the desires of the day for more decoration were columns at the doors, the brick returns at the eaves, and the wonderful delicate brick patterning along the roof line. With cut granite lintels and foundations, these straight forward, confident buildings were erected "not for an investment... but as a means of preserving a proper supervision over the operatives employed and for their benefit."

These boarding houses became a model duplicated by mill owners all over New England. Today the units at 1 Jackson Street can be visited as the Visitors Center for the Lawrence Heritage State Park. Appropriately, the current show at the Center is an exhibition by the Smithsonian Institute called "New uses, Old Places, Remaking America" that highlights the rescue and reuse of buildings all over America, including some in the Merrimack Valley.