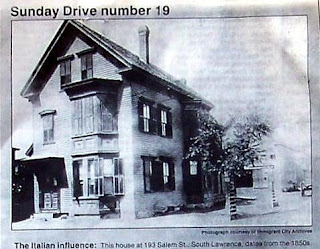 Touch of Italy in the Valley

In the late 1850's the popular style for houses was Italianate. The pattern books from England at the time showed picturesque homes with steep roofs and wide eaves, a design adapted from rural Italian buildings, not the classical monuments of Rome.

American carpenters copied these details to dress up American houses, and this house is the result. It is a house designed for a narrow lot - one room wide with an entry hall and staircase to one side. All over the Valley there are houses like this, their size dependent on the size of the lot. Their character depends on the Italianate details added by the carpenter: a bay with paired windows accenting the front room is complimented by the heavy brackets supporting the roof over the front door. The gable end facing the street is detailed with flat boarding and brackets under the generous roof overhang.

This Italianate house, located on the corner of Salem and Carver Streets, boasts two story bay windows on each street and elaborate hoods over the shuttered windows. Owned by the Manahan family from about 1867 to the 1930's, it may have been a stop on the Underground Railroad that escaping slaves used to get to Canada - this possibility is suggested by a hidden stairway to an attic room.

Note in the photograph the tree-guards to keep horses from eating the trees, and wagon wheels from bumping them, and the stone post at the front door to anchor a horse's reins.