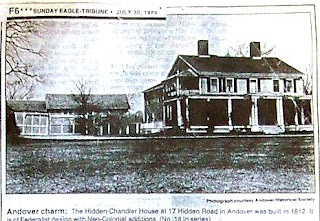 Andover house is example of both Federal and Colonial Revival design

When Lucy Nesmith bought this house in 1897 she wished to improve it.

What she remodeled was a house built in about 1812 by David Hidden for his father-in-law, Issac Chandler, in the Federal style popular after the American Revolution. The Hidden family had lived in the house since 1816, and had been active in the town. Mary Hidden, David's daughter, an Abbot Academy graduate known for her culture and intelligence, had provided boarding for many locally famous people. She died in 1893, and when her brother, David Hidden, died in 1896, the house was sold to Lucy Nesmith.

The nostalgia at the turn of the century for colonial America inspired builders to recreate colonial homes and Mrs. Nesmith followed the style. She rebuilt the back wing and added the porch and sunroom with its deck and railings (to the left of the picture). But while the forms she used - columns and the pediment over the entrance - were inspired by the grander homes of colonial times, the spaces are strictly 1900 in style. Actual colonial homes did not have porches: people were either in the house or out in the yard. Nor did they need sunrooms. So Mrs. Nesmith's piazza and sunroom speak of leisure unknown in early New England.

The sleeping porch on the end of the second floor is a post World War I addition, when sleeping in the fresh air was considered healthful, a far cry from the dreaded 'night vapors' of colonial times. The piazza is now gone, but the 'improved' Colonial Revival front door and sun room can still be seen.

When I wrote this I called the 1900 improvements "Neo-Colonial". Today the usual name is "Colonial Revival". Today we understand that the influences are as much the classic forms championed by Thomas Jefferson as the colonial forms of Newburyport and Portsmouth.