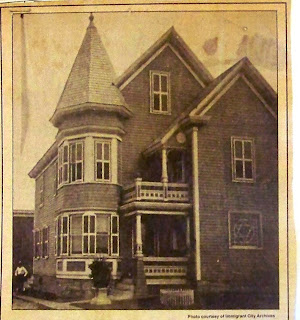 Frank Carleton, a contractor and real estate dealer, built the house at 523 Andover St., South Lawrence, to be a model for his development "Carletonville", which he described as having "some of the most elegant and desirable residences in Lawrence".

He featured the house in a full page advertisement in "Lawrence, Up-To-Date, 1845-1894". The book praised Lawrence's 50 years of growth and progress. Prominent businesses took out ads in the back pages. The popular opinion was that Mr. Carleton's new development would be a failure because it was on the other side of the railroad tracks on a road that only went out to farms. Instead, Carletonville was a great success.

Despite its simplicity, the house is a good example of what home buyers wanted in 1895. It is really just a simple box with a small front extension with lots of details added on. The bay windows at the front of the house on the first and second floors are placed on the corner to create a tower. The two porches are gaudy with elaborate posts and railings. Even the windows are elaborate. The leaded glass window in the front is not just a simple square, but a six-pointed star. The trim, including the shutters, is painted in contrasting colors. Note the real shutters and that they have been swung shut on the second floor.

There is no record indicating why Mr.Carleton used a six-pointed star, but he liked fancy windows and put them into many of his houses in Carletonville.