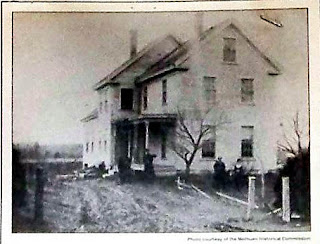 Here is a mid-18th century farmhouse. How can we tell? Because the asymmetry of the house tells us it is Victorian (although its balanced windows and eave returns remind us that Greek Revival details are still in fashion). We also know because the windows are large, and the ceilings high. The small chimneys indicate heating was by stoves, not fireplaces, so the rooms were easier to keep warm. Glass had become easier to manufacture, so more available. These are all indications that the house was built at the beginning of the American industrial revolution.

There is nothing elaborate about the house - just three boxes set together with a porch. Farmers, generally busy, didn't build fancy houses. But, understanding the weather, they faced their houses to the sun. And here the entry is on the south, protected by the porch. That practical porch keeps people out of the mud in the spring, shields the house from the sun in the summer, makes a sunny, protected place to sit in the fall, and is tall enough to let the winter sun shine through the long windows into the front room.