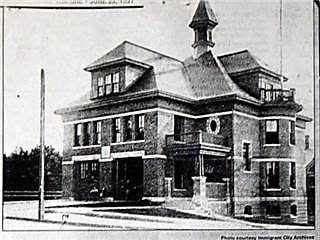 In 1894, Melvin Bell, chief engineer for the city of Lawrence, was concerned that the water pressure on Prospect Hill was "too low to be of any use, only supply for an engine." So he recommended that the new fire station to be built at Howard and Platt Streets house a chemical engine, one that would contain a fire until pumpers could arrive from down the hill.

Here is that station, designed by John Ashton (who also designed the fire station in Methuen). Note how well he fit the building to its neighborhood and site - the station is strong and imposing, massive enough not to be dwarfed by the Rollins School across the street, while the tall porches, long windows and dormered roof are residential forms appropriate to the neighborhood.

The tower, nicely visible down Howard Street, was a cupola to vent the hay and oats that were stored in a loft above the horses, who lived in the rear of the station. The station entrance, set at the street corner, and the curved bay with its balcony take advantage of the view. I like to imagine a firefighter raising the flag on the balcony, then standing a moment to look out over the city.

The firehouse on Bailey Street, South Lawrence, was built from the same plans, except that the tower for drying hoses was added on the left side. Both stations boast wonderful features not visible in the photograph - stained glass windows in honor of the firefighters, carved granite lintels and plaques. The inside spaces are ornately finished with brick and wood mouldings.