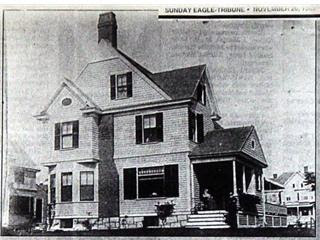 When Bruce Street on Clover Hill in Lawrence was being built in 1890, Mary Mann Ball started a diary called 'The Annals of Bruce Street,' and for which her husband, Rodney Ball, took cyanotypes - blue photographs which were the snap shots of the time. From that history, now owned by the Immigrant City Archives, comes this picture.

Here is the home of a successful undertaker, Steven C. Parsons. His wife and her brother, a retired farmer, sit on the front porch.
The house is late Victorian, Queen Anne, with its asymmetry: bay window and overhanging second floor on the left balanced by the entry porch on the right, and an irregular roof line and variety of window sizes. But it is much simpler than earlier Victorian houses: the only real decoration is the brick work on the chimney and the frieze work in the gable and above the picture window (almost invisible in this photograph).

Although the builder, Mr. Kimball, used a variety of materials - cut stone, brick, clapboard, shakes, and lattice - the feeling is restrained and dignified, not exuberant as would have been the case in earlier decades. The technology of the times, as well as the tone, can be seen in the house: the large plate glass in the picture window reflects the glass manufacturer's skill. The exposed chimney with patterning to draw attention to itself tells us that no longer does the chimney need to be inside the house, warming the space with its mass. This chimney is merely a conduit for smoke.