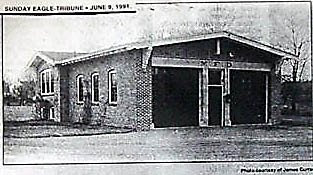 Methuen firehouse rang in a new era of civic duty

This firehouse sits quietly on the land, low-key and almost ordinary, indicating that fire protection in 1922 had become part of accepted civic responsibility - no longer something to brag about.

Yet it is a building with quiet pride. Built solidly of brick, its scale is generous: large bays for the trucks, and a triple window to let light and sun into the firemen's quarters. The large windows, and doors with glass panes, also allow passersby to admire the engines. And the broad roof with its deep overhang and turned rafters, typical 1920's residential detailing, is fitting for a station serving the newly built residential neighborhoods to the west and the truck farms on the Merrimack to the east.

But the wide lintel over the doors, coupled with brackets (much simplified since Victorian times), keep the station from looking too domestic. The lintel also supports the brick above, which is laid in a decorative - decidedly not structural - herringbone pattern. A nice touch is the row of brick headers just above the lintel that continues around the corner and down the long side wall.

The architect, John Ashton, was part of the firm Ashton, Huntress and Pratt, which had offices on Essex Street in Lawrence until the 1950's. They designed many public buildings in the area, including the B&M Railroad Station in South Lawrence and the Steven Barker School.

Another interesting fact is that when the station was built, East and Swan Streets met at an angle - the safety of the driving public did not require the right angle stop that is there today.