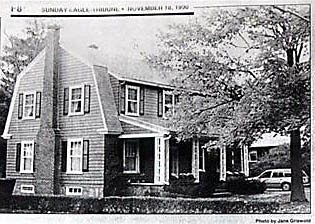 Dutch Colonial in Methuen was constructed about 1905

Dutch Colonials originally were built in New York around the Hudson River. The Dutch colonists put their houses together differently from how our English settlers built in the Merrimack Valley. The gambrel roof is a natural way to cover the Dutch post and beam frame. Sometimes the roof was expanded to cover a porch. Once in a while someone added dormers.

Architects in the late 19th century, borrowing from colonial America, reshaped the Dutch farmhouse into what became a very popular early 20th Century style. There are Dutch Colonials all over America: little and big, some with porches, some with columns and pediments and arches, English colonial detailing, but all with that bit of gambrel roof on the ends. The house is really a full two stories, except for the last few feet on each side. With gambrel ends, the house appears to be one story with a dormer poking through the roof.

This house on Prospect Street, Methuen, was built about 1905, we think, because a mortgage taken that year was large enough to pay for not only a piece of land, but also the construction of a house. Note the front porch. This is not a rural stoop, built for weather protection or a spot to shell peas - this porch is for people who live in a town and expect to be part of it. The columns with their lattice and the low wall create a sense of place, a gathering spot: space to entertain, to talk with neighbors, to leisurely watch the comings and goings on Prospect Street.