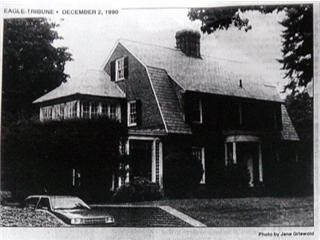 Shawsheen Village: One man's dream of the ideal community

In 1920, William Wood, owner of the American Woolen Mill (largest manufacturer of worsted woolen cloth in the world), decided to build a company town at what was then called Frye Village, in Andover. Named Shawsheen Village, it would be more than the little neighborhood he had constructed around Greenfield Street in South Lawrence (see column #49). Those houses simply allowed the laborers to live in a pleasant neighborhood near the mill. But in this new town - built for office workers only - were a school, parks and stores, the mill and its offices. The housing - 'Brick Shawsheen' for the managers and 'White Shawsheen' (white painted houses) for the clerical staff - was designed by six architectural firms.

Andover architect, Addison LeBoutillier, drew up the plans for 13 Williams Street, a brick house with a gambrel roof. Is this a Dutch Colonial like the one we looked at on Prospect Street in Methuen (#50)? No, only the roof style is the same. Here the upper roof slope is steep, not gentle. The windows are narrow and long, not wide and airy, and the chimney faceted, not smooth. The symmetry of the front facade is completed by the curved portico, not a generous porch. This is because Addison Le Boutillier looked more to medieval England than to colonial America for his inspiration.

Although the houses in Brick Shawsheen were in the latest styles and boasted sun rooms and maid quarters, many of Mr. wood's executives did not want to move from the sophisticated city to rural Andover. In 1929, the American Woolen Mill moved its corporate headquarters to New York City. The buildings were sold and William Wood's dream for the ideal community died.

The quality of the layout and design of Shawsheen Village is still evident today. It is a well-loved, popular place to live. 'White Shawsheen' houses are now painted other colors too, and there are many garages, originally outlawed by Mr. Wood.