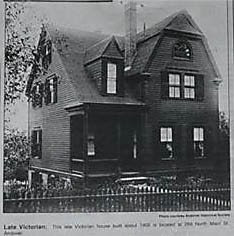 Andover home is an example of late Victorian architecture

Look at the planes and angles of this house! Here nothing is simple.

The first floor box has had space taken away to make the front porch. Then the main roof starts at the porch - as would a cape - but expands to allow a full second floor at the rear. There is one ordinary dormer, but the other turns into a gambrel roofed wing, which - with its symmetry and half circle window - becomes the dominant feature of the house. And everything has an extra curve or another line of moulding.

Compare this use of the gambrel roof to our colonial examples. Those houses were straightforward boxes, topped by a roof of four planes instead of two. It is hard to think of this 1905 Victorian's gambrel roof as a copy of those simpler houses, but it is. After 1875 - America's Centennial - architects began to look to our country's past rather than to Europe for inspiration. One form that seemed particularly American was the gambrel roof, so it was added to the Victorian architect's vocabulary, another shape to be used to create a successful design.

Notice the picket fence and expanse of lawn in the photograph. The widening of North Main Street has now taken almost all of that yard. The picture comes from an album of snap shots taken around the William Wood estate on North Main Street about1910. Here lived Mr. Wood's valet, and the next houses up the street were for his butler, his chauffeur and his gardener.
Houses matching this one can be seen on York and Canterbury Street. Someone researching the deeds might be able to tell if they were built by the same person.


The house on Canterbury Street was moved to its location when William Wood built Shawsheen Village in the early 1920's.
I was told later than I didn't match the right house to the right member of Mr. Wood's staff. The Andover Historical Society has the proper listing.