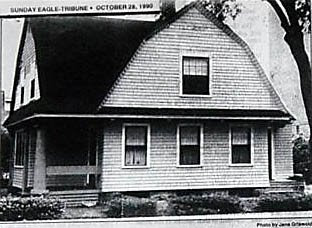 Here's a house with a gambrel roof and balanced windows, but this certainly doesn't feel like the colonial houses described in past articles.

About 1880, people began to build houses in a manner we now call the shingle style. As the name implies, shingles covered most of the walls and roof. The continuous surface of shingles coupled with the gambrel roof conveys a sense of shelter, as appealing as any pre-Revolutionary house, but coming from a different era. Architects designed dramatic shingle style mansions, but many simpler shingle style houses were also built all over the Valley.

This one, built in 1910, is one of my favorites. I especially like the emphasis of the character of the shingle style in the choice of details. The roof isn't just a gambrel, protecting the second floor; it surrounds the first floor too, emphasizing the idea of shelter. The corner post on the front porch is round and massive, big enough to carry the visual weight of that roof. The column also gives the porch the feeling of being hollowed out, within the boundaries of the house. And balancing the front, hardly visible here, are two more half columns, pilasters, which repeat the feeling of holding up the all-encompassing roof.

William Wood built this house, along with the rest of the neighborhood, probably as advertising for the American Woolen Mills. The architect, Perley F. Gilbert, of Andover and Lowell, designed each house to be built for under $2500. Each had the latest amenities: hot and cold running water, gas for lighting, stoves for heat, a cement basement floor, a clothes line. But there was no space for cars, central heat or electricity - that came later.

For a description of a gambrel roof, please read column #46, The John Ward House in Haverhill.