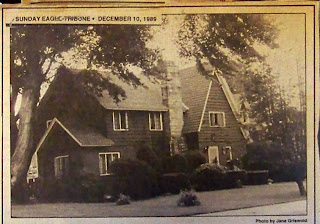 After the First World War, many Americans turned their backs on Europe in favor of our colonial past for inspiration. But not everyone - while some designers admired the European use of contemporary materials such as steel and concrete, still others discovered French and English medieval cottages. These, with their steep roofs and asymmetrical design, had a quaint look that appealed to Americans. Their reasoning was that they already had houses with adequate furnaces, electricity and indoor plumbing - now they wanted comfortable and cozy homes. This house, at 190 Berkeley St, reflects the style and feelings of those few that were built during the 1930s, in the post-WWI and Great Depression era.

The home is one of three built side-by-side for the Brandy family, Methuen mill owners, and it is an excellent example of the houses built to imitate the cottages in the English Cotswold hills.
The layout is irregular with steep roofs that do not match in pitch or height - the roof over the front door is even lower on one side than on the other. The windows, with casements grouped together, peek out from under the roof overhang, reminding us of windows under thatched roofs in England. The front entry is small and unadorned; the brick on the first floor gives way to rough-sawn siding (knots and all), extending into the eaves, and all done in natural colors. The chimney of irregular stone topped with chimney pots anchors the house spreading out around it.

But note the modern details. There is a sun room on the left (south) end, a garage attached to the house (invisible here behind the plantings), and the house is set nearly on the ground, as deep foundations could now be dug easily by machine (instead of by hand).