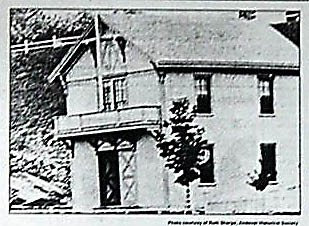 This is Ballardvale's first fire station. It was built about 1870 for the mills at the dam on the Shawsheen River. It sits almost on Andover Street, just up the hill from the mill complex. This way, the pumper, which was housed here, could be rolled downhill to the mills easily by men without wasting the time required to hitch up horses. The mills processed wool and cotton, and dust was such a constant fire hazard that J.P. Bradley, the mill owner who purchased the 'hand engine' in 1859, included the fire station in his 1872 insurance report.

The fire station had a garage for the engine on the first level and a meeting room above. Buildings in the late 1800's were built from wood cut in dimensional sizes, 2 " by 4" and so on, joined together in a frame, a change from the earlier use of large posts and beams (and which you can still be seen in barn construction). Here the 'sticks' that make up the inside structure of the building also make the decoration outside - the pattern of the doors and the detail at the gable and eaves. The cross-bracing on the doors, pieces of wood which hold the panels together, become the focus of the design, repeated in the gable, where the ends of vertical boards (as well as those under the eaves) are cut in fancy patterns. The brackets supporting the roof overhang are also shaped; this building's level of decoration befits its status of importance in the community.

The engine was built in Roxbury, Mass., and first used in Cambridge. It was pumped by volunteer firemen sending water from the Shawsheen River through linen and leather hoses. The fire engine is now in the barn of the Andover Historical Society. After the fire station was no longer needed for the manual pumper, the building became a young men's club. In the 1920's it was sold by the mills for use as a dwelling, which it is today.