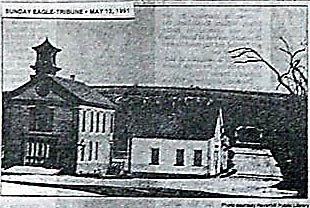 Rocks Village fire station is a landmark in Haverhill

Rocks Village built this firehouse about 1861 in order to house a hand pumper that was no longer needed in downtown Haverhill.

The village had a general store, tavern, and the ferry, and later the bridge to West Newbury. But it did not have a church or mill, so this station included its own tower and bell to summon the firefighters. That tower, with its curved roof and Italianate brackets, is just barely within the vocabulary of Greek Revival architecture, the accepted style for public buildings since the early part of the 19th century. Indeed, the whole building seems to leap from the simplicity of Greek Revival into Victorian extravagance. The front boast not only a Palladian window on the second floor, but an oriel window in the gable, while the corner pilasters are faceted (not just plain boards), the overhang is generous, and the doors are paneled in Victorian style.

Henry Ford coveted this firehouse. He wanted to move it to his museum, Greenfield Village in Dearborn, Michigan. He did buy the bridge-tender's house (to the right in this photograph, taken before 1905) and the hand pumper. But the Firemens' Association wouldn't let him have the station. Today it is maintained by the Rocks Village Memorial Society.

Note the farmland behind the firehouse in the photograph. Those are the hills of West Newbury across the Merrimack. The bridge is to the right, and today those fields are woods.