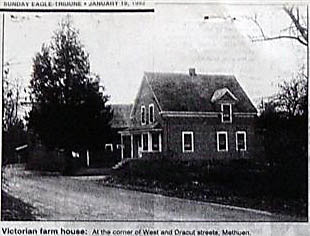 Here is a late Victorian farmhouse in a shape that been popular since at least 1850. It is a story and a half, with a steep roof gable facing the street. Its pleasing shape (the relationship between the size of the roof and the walls), wide roof overhang and balanced 2nd floor windows on the front were all standard details for the time. The bay window and porch and the dormer window with its detailed roof date it to around 1890.

So, why am I writing today about a house built at the end of the 19th century when I said in the last article that I would focus on what it was like to live at the time of the witch trials in 1692?
Because what a farmer expected to have in his home in 1890 contrasts sharply with what a farmer built 200 years earlier in the witch trial era.

The Old Red House of the last article, built in 1704, had just one room up and one down, a stair and an entry. It had a shed tacked onto the back and a lean-to set against one side. Our Colonial ancestors felt no need to distinguish kitchen space from the parlor or separate their household from its surroundings. By contrast, this house stands apart from its barns and outbuildings - the Victorian farmer who build this wanted his dwelling space separated from his working space.
In addition, although the house pictured here isn't big, it has a front room, a kitchen, a front hall, a back entry, and at least 2 bedrooms upstairs as well as one on the first floor - amazingly ample when compared to the two room Old Red House.