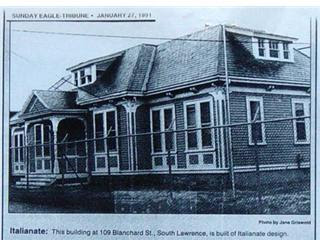 John Henry Horne came to Lawrence to help build the Great Dam. By the 1860's he was producing machinery for paper mills in a factory along the North Canal, and in the 1880's, JH Horne and Sons relocated their plant beside the railroad in South Lawrence and built this office building on Blanchard Street. Today, JH Horne and sons is run by John Henry's great-great grandson. It is the second oldest company in continuous operation in Lawrence (the Essex company is the oldest).

The architecture here is fun to decipher because it tell us what was acceptable for a prosperous manufacturer to build in the 1880's. The basic style is Italianate, a safe choice. The long, paired windows, the double brackets and frieze band under the eaves had been popular since the 1850's. But the cut out corner pilasters are more delicate, and the roof too steep for classic Italianate. The front porch, with its turned posts and scalloped shingles, is definitely Queen Anne in style. The nicely scaled dentils running at the eaves (not visible in the photograph) add up to a Victorian office building - not ostentatious, but with a sense of pride and well-being.

The well on the JH Horne property, which many people know about, was dug sometime before 1905 to provide water for the factory. The high iron content of the water was no good for the the boiler, but fine for workers to drink.

In 1964, the wing to the right was added. The original moulding was salvaged for reuse and the style of the building repeated. It is a graceful expansion.