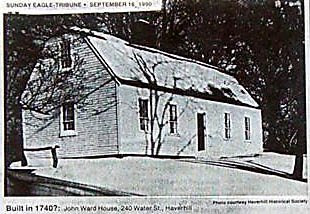 This is a simple house, one room on each side of the front door and two more under the eaves, not much space for a family. Imagine then how it would have been to live in only 2 rooms, because the right side is the original house, while the left side is a later addition.

Clearly the people in this house owned very little, lived very simply, and did not expect much privacy. They did, however, make the most of their attic space by building a gambrel roof. Because it is built of two parts - the flatter pitch at the chimney, the steeper sides to the eaves - the roof allows more usable floor area and gives room for an ample window in the gable giving good light.

This gambrel cottage is one of the buildings of the Haverhill Historical Society. It was on the land in 1750, moved to Eastern Avenue in the 1880's, the returned and restored by the Saltonstall family about 1906. Later, in the 1940's, more work was done. Unfortunately, records were not kept either time, so we cannot now know for sure what was restored, what was replaced, and what was added. Also, although the land ownership and use can be followed through successive deeds, the house is much harder to trace. There is no clear date when the original right half was built or when the left half was added. At one point the site was used for church services, but this house was not built for John Ward, the minister who came to Haverhill in 1641, as earlier historians wanted to believe. Like the other gambrel roofed cottages in the Valley, it was probably built between 1710 and 1740.