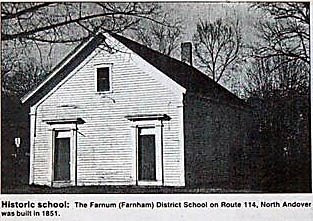 Greek Revival style, one room school house, built in 1851 by the Town of Andover to replace an earlier building.
Photograph from the Andover Historical Society Collection

Notice the two front doors: the right one was for girls, the left one for boys. The windows are large to provide light since there was no electricity. And the small, single flue chimney served the pot belly stove that gave heat from the front of the room. The school faces south, down the Turnpike with its 'back' to the cold north, a common way to place a building when land was plentiful and heating inefficient.

In the early 1800's, Americans looked for new ways to express their pride in their new democracy through their buildings. Ancient Greek city states such as Athens embodied these ideals, so American builders copied Greek temples. They turned their buildings so that the ends faced the street and then added mouldings and trim to copy the marble columns and pediment of a Greek temple. By about 1830 almost everyone finished buildings, public and private with some Greek Revival detail. The builders of the Farnham (
or Farnum) School added mouldings to the corners, windows and doors. They built a wide roof overhang and added a frieze board just under the roof, simple details to remind us of Greek temples and our democracy.

This is the second column. My editor, Mary Fitzgerald, and I hadn't figured out the format yet, and I wanted to begin by describing basic architectural styles and terms. I think this column fairly boring, but it received much favorable comment over the years.