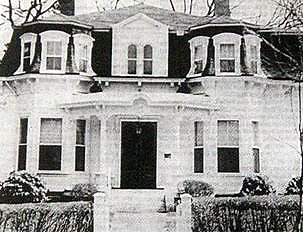 The Draper House is well-known at Abbot Academy, the Andover girls' preparatory school now merged with Phillips Andover. Warren Draper and his wife gave much of their time and money to the school, including Draper Hall, one of the main buildings on campus.

In 1867, they built their own house directly across from Abbot Academy's gate on School Street in the style called Second French Empire. The design, the latest thing from France at the time, is marked mainly by a Mansard roof, the sloping 2nd floor roof with dormer windows. But there are other hallmarks - the matching bays, 'pavillions' on either side of the front door, the Ionic columns and the iron work (not visible) on the porch. Although the house has 8 principle rooms, not including the main hall or the servants' wing, it is a "cottage". The strong eave line at the second floor helps maintain the image despite the ceilings on the first floor being 13 ft. high! 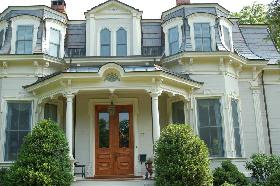 When the house was finished in 1869, the local newspaper reported that people came from miles around to see it. In those days, before the trees grew up, the elaborate arched window on the north side would have been visible as you came up School Street from South Church. Notice however, that the carriage entrance (not visible in either photo - ed) is on the opposite side, the sunny, south side of the house. There was also once a cupola on this house - the narrow, steep stair is still in the attic, but the tower was removed in 1926.