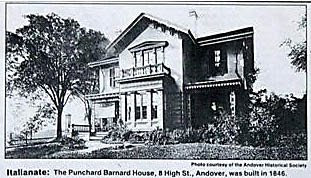 This house is called Italianate, echoing Italian farm villas, and using wide overhanging eaves with paired brackets, long, narrow triple windows with curved tops, and ornamental crowns (the hoods over the windows). Aluminum siding now covers the original flush boards designed to imitate stone, and the corners have wood spirals copied from stone. Since Mr. Punchard, lately returned from England, was his own architect, he also added his own ideas: the T shaped plan and the porches with their sawn posts and trim. 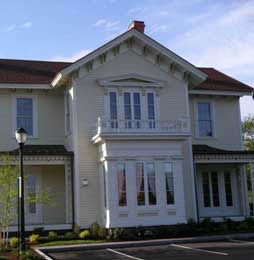 The house is located so as to be seen when coming through the square, and to provide a vista down Main Street for the inhabitants. One can stand there now and imagine how handsome the house was for its time, with its steps and plantings, and the railing on the roof of the bay adding emphasis to the facade.

The Punchard Free School, Andover's first high school, was built from funds provided by Benjamin Punchard, and it looked remarkably like this house.