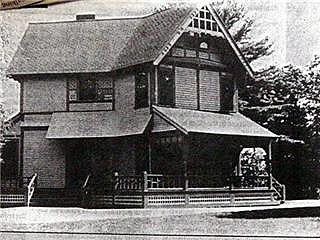 There is a lot to look at in this house. Queen Anne in style, it was built for Charles Abbey Holt about 1880 and sold soon afterward to GF Blake. Set back from the street, reserved and yet approachable, it has a view to the rear out across the meadow. It boasts porches, wings and roofs in abundance, and lots of trim, like spindles and carvings. Their pattern marks this as an Eastlake House. 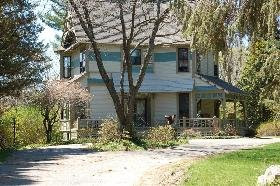 Charles Eastlake, an English designer and historian, had definite opinions. He wrote Hints on Household Taste, in 1868, describing how he thought house interiors should be furnished from the floor of the entrance hall to the place settings on the table. By 1883, his book had been reprinted seven times in the United States. Mr. Eastlake admired medieval English design, which he adapted to 19th century furnishings. But Americans weren't content to limit his ideas to the insides of their houses - they took the designs shown in Eastlake's book and applied them to the outsides as well, adding spindle work to the eaves, sturdy porch railings and carved panels, all creating patterns. Here, the carvings of flowers are applied to the wall above the door in an inventive, asymmetrical design, as well as on the rake at the gable end and in the frieze that runs just under the porch roof.

Unfortunately, Charles Eastlake described Victorian taste as "capricious to constant variation" (a quote from his book), and is reported to have disliked such adaptations of his ideas as were carried out in this delightful house.