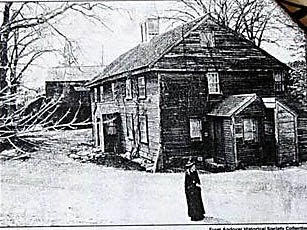 Benjamin Abbot House is one of the Valley's oldest

One of the oldest in the Merrimack Valley, this house on Andover Street, Andover, has some ceilings less than 6 feet high and badly sloping floors. It was built in a classic early New England style, with a door in the middle, two windows on each side, and 5 above. The original house had one room down and one up, with the chimney serving both fireplaces. Although it was a substantial farmhouse for its time, with paneled walls in the front room, by the time of the photograph the house looked quite modest. Or is it just a winter photograph? We today are lucky that no one before us tore it down in the name of progress. 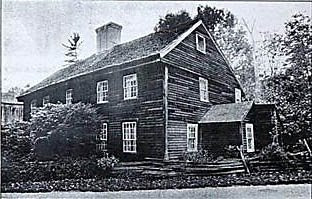 Note the shed to the right covering the well, and the granite at the front corner to protect the house from road traffic - the road is still right there.

Early New England houses were built "to the weather," so this house faces south, with a view (now blocked) across its fields to the Shawsheen River. Its back and long roof are to the north, protecting it from winter winds. The front and side doors are set forward to create weather entrances: two sets of doors to keep out the cold in winter. The central chimney radiated so much heat into the house that in the summer cooking was moved from the main hall to the summer kitchen to allow the chimney to cool down. The chimney is formed with brick pilasters (ribs) as were the English chimneys of the era. This is one way to spot a very old house in New England.
In this house, since there is no fireplace for the upper left room, and wheat and chaff have been found between the floor boards, it is thought the room may have been used for storage. However since it is on the southwest corner and gets hot afternoon sun while being shielded from the north by the out buildings, the room stays quite warm without extra heat.

This was the first column I wrote, so I've added some notes as of this posting - my writing has definitely improved over time, especially as I learned to talk about one architectural idea per house.
The caption under the first photograph reads: "The Abbot House, a center chimney, center entrance colonial, was built about 1685. The salt box was added about 1715. "
The second photo was taken in 1989, showing how little the house has been changed in 300 years.