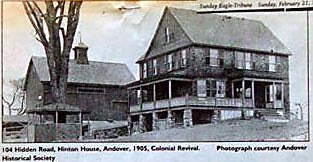 I passed this house and barn many times, catching a view of it behind trees and shrubs, before I connected it to this photograph. Today the barn is painted red, the house is white. It sparkles. The house and barn in the photograph have earth- toned dark walls and roof, stone columns. These natural colors are what the architect, Perley Gilbert, intended when the house was built in 1905. Built in the latest fashion, it was a symbol of the success of Allen and Mary Hinton, who ran the Hinton Ice Cream Co., in Andover from 1877 to 1922.

Allen Hinton was born a slave in North Carolina. In 1864, he moved to Andover and began selling snacks from a wagon to Phillips and Abbot Academy students. Then someone suggested ice cream might sell well. So Mary, his wife, made the first 2 gallons, and by the early 1900's they were selling hundreds of gallons a week from their wagon and at the South Main Street store. The pavillion around the tree in the photograph served the customers before the store was built.

In 1901, Mr. Hinton was able to buy the farm where he had been a tenant at auction for $525. He immediately built a new barn - the one in the photograph - and an ice house.
He hired Perley Gilbert, whom he had known at Phillips, to design the house. It is a restrained design - spacious, with large windows, including a broad bay, a gracious porch with elegant detailing in the roof and railings. It uses the vocabulary of the Colonial Revival style, but mainly this is a comfortable house for a successful framer and businessman.

A lot more about the Hintons and their ice cream company can be read in the files of the Andover Historical Society.