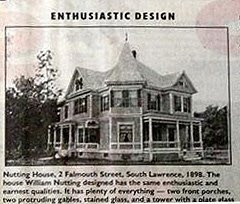 William P. Nutting, a carpenter, built this house in 1898 as his home and office. He used this photograph to advertise his business in the Directory. His ad states that repairs will be “Neatly Done and Promptly Attended To,” and that estimates will be “Cheerfully Given.” The house, which he designed, has those same enthusiastic and earnest qualities. It has plenty of everything – two front porches, two protruding gables, stained glass, and a tower with a plate glass window facing the corner, which looks down on the intersection of , South Union and streets, eager to see and be seen. Although the design leans toward the new style, Colonial Revival, with its symmetrically placed windows and gables, it is still fanciful Victorian – the windows are symmetrical around the tower with its curving roof and finial, not balanced on either side of the front door in colonial fashion. The frieze and corner boards are colonial, but all the wall surfaces are outlined, and those below the windows are finished with flat siding instead of clapboard. Also, the enthusiasm for surface decorations and mouldings on mouldings – so common in the Victorian years – are still present.

William Nutting’s name first appears in the Lawrence Street Directories in 1895, as a boarder at , and by the 1898 edition, he has moved to this address. But by 1904, he is listed as a foreman for Pike and Sons, Contractors, and lives in . Then he disappears from the directories. Note the fields and woods behind the house in the photograph. Today the land is a parking lot and the Monomac Mills complex.