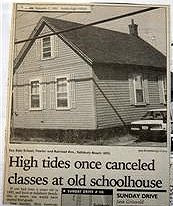 
If you had been 6 years old in 1893, and lived at , this is where you would have started first grade. Your teacher, Miss Gertrude Richards – who earned $4 a day, plus board – would have been waiting for you and the other first-, second- and third-graders when you arrived for your first day. This is a very small school building. There is no space here for the standard two front doors, one on the left for boys, one on the right for girls, or even a cloak room. There is only the classroom. But its builder, William Charles Pike, did not skimp on style. He bound the eaves by a crown moulding, and returned them neatly to a wide frieze board at the top of the clapboards. Today, 100 years later, the original siding and mouldings are still there. Notice how the school sits well above the ground, above most flood water. Even so, the records show that when the tide was especially high, school would be canceled.

The trolley along the beach ran down to the mouth of the at Black Rocks. A second line ran into itself. In 1917, the Sea Side school was closed and the children rode the trolley to school in town instead. (Any idea why the school closed? Too much high tide, or too many students? And when the trolley line went in? Are the two at all connected? - ed) Today, the school looks much like the summer cottages which surround it. Its roof line, its plaque and its extra yard – probably the children’s playground – remind us of its origins.

(I've spent a lot of time looking for more info on the trolley that used to run here, but only came up with a few brief passages from books scanned by the GDP. These include page 88 of Whittier-land: A Handbook of North Essex, written by Samuel Thomas Pickard and published in 1907, and page 130 of By Trolley Through Eastern New England, written by Robert H. Derrah, and published in 1904. - ed)