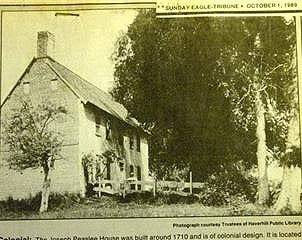 Around 1710, this house was built by the Peaslee family in what is now East Haverhill - then a wilderness - uphill from the Merrimack River. At first glance it is the usual center entrance colonial home with two windows on either side of the door and five windows spaced evenly across the second floor. But the chimneys are on the ends, not centered in the middle of the roof, and the end walls are brick.

The whole house has 16 inch thick brick walls, but the front has been plastered. Houses built of brick as old as this are very rare in the Merrimack Valley, but three exist in Haverhill. The size and pattern in which the bricks have been laid comes from England, as did the settlers. Thomas Dustin, another early settler of Pentucket - the original name for Haverhill - was a brick maker by trade in a place where brick and lime for mortar were locally available. Note how small the end windows are, and the overhanging course of brick where the second floor begins. At the ridge, the brick does not come to a point, but curves in an arch. The chimneys are extensions of the brick wall, ending with the traditional British corbeling.

About 75 years after this house was built, the owners updated it by covering the brick with wood clapboard . Brick is fireproof but does not insulate as well as wood, so the new siding must have made the house warmer. The clapboard remained for at least 150 years.

Wait until a hard frost to drive past and take a look - the house is surrounded by a tall, magnificent lilac hedge. (here's a link to a map of historic places in Haverhill, including the Peaslee House - ed)

Structural brick houses do not work well in the New England climate. The dew point- where the temperature change causes water in the air to condense - is at the point where the wood joists rest on the brick wall. The wood rots, the floor sags.
The last time I saw this house it sloped inward.