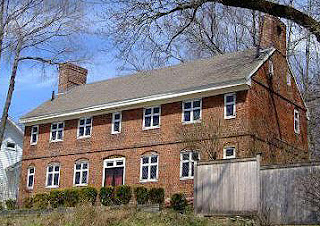 If only rebuilder had kept records...photo courtesy of Haverhill Public Library

(current photo not original to the article, but it does a better job than the original at showing inset chimneys and smaller end-windows - taken by David Shultz, ed.)


Wallace Nutting, who took this photograph of the Hazen Garrison House in approximately 1920, rebuilt colonial houses at the turn of the 20th century. He had an eye for special houses – this is one of only three brick First Period (i.e., before 1725) houses built in . Brick arches span the windows and reinforce the chimneys, and only 4 rooms large, the house feels bigger because the chimneys are built within the ends, as part of the brick walls. So, unlike a center chimney colonial with two windows on either side of the front door, here there are three – the third being a little window for the cubby hole by the fireplace. The chimney and fireplaces are set into the rooms because once they are warmed by fires; they radiate heat into the rooms.
Wallace Nutting had no doubts about how this house must have looked originally. Discarding the existing windows - square paned traditional sash that slid up and down – he added the diamond paned hinged casements seen in this photograph, sure that the house had originally looked like an English medieval manor. He wanted the house to have been built before 1700. Today, we date it to about 1724. Nutting labeled it a ‘garrison’, referring to the last American Indian raid on , which was in 1721. So this house may have been used as a refuge. The extended row of brick at the second and third floor is not an overhang of one floor over another, but a way of covering the ends of the wood joists, which tie into the brick wall there.
Historians today wish that Wallace Nutting had kept records of what he found as he rebuilt this house, so that we could agree or disagree with his vision of the original house. 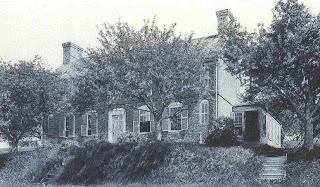 (Here is a photo of the house in 1870 - I've added this as an example of how much he must have changed it. Both photos borrowed from this website. Here also is an interesting link to real estate website, which describes the house's history (both no longer active), and another to a Lawrence Eagle-Tribune newspaper story from 2007, about one of his descendants– ed)
More information, added 1/18/2014: I know of anther house in Haverhill with a lower level built as garrison with angled reveals on openings, similar to what one would  find in a castle wall. Perhaps the basement here was once partially above grade and had similar openings. The Peaslee House - which I have written about - is also reported to have been a garrison.
The Haverhill Public Library has extensive records and resources on Haverhill history.

These 2 photographs are clearer (less trees in the way) depiction of the house than the original photograph I used. So they can stay!

The colonists who settled Haverhill were brick makers. The clay on the Little River which runs into the Merrimack was/is excellent for making bricks. They built what they knew. I need to post the other columns about the brick houses of Haverhill!

I know this is a rather old blog, but the top photo (w/o) the trees was NOT taken by Wallace Nutting. It was taken by Dave Shultz of Coldwell Banker. Dave was our realtor during 2007-2008 as we listed and sold this house we had owned since 2003. The fence in the photo was only added in 2003 - long after Wallace Nutting!

thanks for giving the proper credit. I am sorry it has taken me so long to thank you.