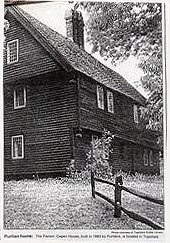 House Puritans built for parson was best in 1683 Topsfield

The Puritans came to New england to create a new world, a utopia based on their religious convictions. So, in 1682, when the Puritans of Topsfield asked Joseph Capen to be their new minister, the most important position in town, the house they built for him was one of the biggest and best. One indication of this was the glass in the windows - it had to be brought all the way from England by boat.

The style of the four room house was that of the medieval cottages the Topsfield citizens remembered from England, with steep roofs and massive chimneys. Those cottages provided simple shelter - the door was just an opening, as were the windows. The ornaments -wooden drops - were placed at the corners of the house, at the second floor and roof overhangs, drawing attention to the mass of the house, not the elements. The whole, whether that be the house, the family, or the community, was what mattered, not the individual.

This historic house is now open to the public in the summer. Visitors can look out across part of the 12 acres of land the Topsfield community gave their new minister. In England only the lords owned the land, but here the people could own the land they worked and be independent. For example, widows did not have to remarry, but could maintain themselves on their own land. Many of the women accused of witchcraft at the Salem witch trials in 1692 were widows living independently.