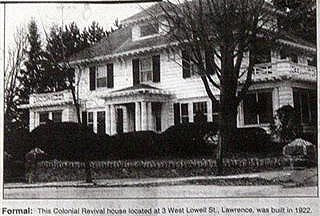 E.O. Steinert, a Lawrence contractor, built this house at 3 West Lowell Street in Lawrence in 1922. When I first saw it on a sunny day, all those fancy cut rafters, brackets and railings cast marvelous shadows across the face of the house. This is a fine example of Colonial Revival architecture with its ordered windows and columned porch presenting a formal face to the world.

I want to compare the way this house talks to the world with the way our colonial ancestors saw themselves within the community, since I said I would try to show something of how people lived here in the Valley at the time of the witch trials. Imagine you were invited here for tea, 70 years ago. You wouldn't just walk in the door, but would come through the stone wall, across the front lawn, and wait on the front porch to be welcomed by your hostess who would usher you into one of the front rooms. On the other hand, the delivery man, bringing tea cakes, went around to the back door. Neither you nor he would see the whole house - the family here could show outsiders what they chose.

That sense of separation from the world would have bewildered families living here in 1692. Back then, people walked into each other's houses regularly, and because families lived mainly in one room, one's whole life was open to inspection when a neighbor stopped in. A 'Good Wife' - a title of respect - believed it was her duty to visit her neighbors to insure that they were conforming to the moral code of the community. Our sense of privacy is something they simply would not have understood.