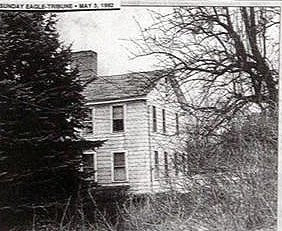 In 1700, Methuen didn't exist. Haverhill's town line was about where Interstate 93 is today, and the land in West Methuen between that border and the Dracut line was in no town, with no government, and no taxes.
Several wealthy Scotch families from Ipswich, taking advantage of the loop hole, settled here on grants of several hundred acres. It really was away from the known world in those days - the church in Haverhill, the center of community life, would have been at least 8 miles away over Indian trails or by boat down the river.

The deed to this property, the Clark-Fredrick House, written about 1700, starts in Haverhill and lays out the route up the Merrimack River before turning inland. It refers to the property as "bounded on the north by wilderness", (what is now the Methuen-Pelham town line). There are other references to the edge of Methuen being the frontier - Harris Brook was once known as London Brook, a corruption of an earlier name - Land's End Brook and Meadow. And there is still a World's End Pond at the edge of Methuen and Salem. Wilderness, as the name implies, is connected to wild men and wild animals, as well as the unknown; the people who chose to live here deliberately moved away. I wonder if they preferred wilderness to life in a society which tried its citizens for witchcraft?

This house, probably not the first built on this site, is not easy to photograph with its full grown trees. As Hampshire Road curves past it, you can catch a glimpse of its square shape, its massive center chimney and regular windows. That form - together with how it sits on the land - dates it to about 1720. We know it was remodeled about 1790, and the return and overhang on the eaves indicate more updating done about 1840.