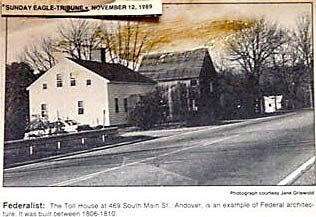 Toll collector's house begs for answers to its location

Why is this house here? It is obviously old, with that traditional center chimney, centered front door and balanced narrow windows. And those little square windows on the second floor date it to the early 1800's. But if it were built as a farm house, where are its pastures and fields? This house sits facing the road, with swampy land down a steep bank at its back. Or, if it were built for a craftsman, why would he have locate it here, 4 miles from town? Another option is that the house could have been moved, but why here?

This is the house for the toll collector of the Essex Turnpike. He collected the fare and "turned the pike" - a long pole that barred the way - for people who wished to use the private road.
The Essex Turnpike Corporation laid out the road , now roughly Route 28, in 1805. Crossing the Merrimack close to the railroad bridge just below the Great Stone Dam (which wasn't there at the time), it ran directly north over the hills of Methuen to New Hampshire (note that I was wrong when I said previously that the Turnpike crossed at the Casey Bridge in Sunday Drive #20).

The straight road, and its sister, Route 114, the Salem Turnpike, were successful enterprises, so the Essex Turnpike was extended south in 1806 to the North Reading line, and a toll house
was built. The first recorded toll collector, Samuel Cheever, lived here from1810 to 1827, and the turnpikes were private property. There is a story about moving the house now at 314 Broadway, Methuen, down Route 28 in Salem, NH, which at that time was owned by the Londonderry Turnpike Corporation. The toll keeper, uncertain about such activity, kept the house sitting in the middle of the road overnight while he sought approval to proceed from the owners.