200 years at the beach: House has gone with the flow

This postcard of The Homestead on Hampton’s North Beach seems easy to decipher – a Greek Revival farm house built around 1830, its gable detailed as a pediment, facing the sun and High Street. Its barns to the left, it seems to be a farm that became an inn, as the beach became a tourist destination. Then I talked to the current owners, who are only the fifth family to own the house, and read Joseph Dow’s 1892 book, History of Hampton. They told me that the house was built by John Elkins on the knoll called , just off , around 1800. Moses Leavitt bought it in 1802, just before the birth of the fifth of his twelve children.

The 1806 map of notes M. Leavitt’s tavern at the edge of the beach, so this house has in fact been a hotel for almost 200 years. That surprised me. I expected farms and fishing shacks at the beach in the early 1800s, but why a hotel? Who stayed here? The answer is that fishermen and fishmongers from came in the winter, and bought frozen fish to sell back in and . While they were there, the barn housed their wagons and horses. Leavitt’s tavern had a summer trade as well – houses at the beach are listed as taking summer boarders as early as 1826. Dow’s History calls the ‘famous’ and notes that it is currently (in 1892) being run by Leavitt’s grandson, Jacob.

Over the years the house has grown from its original one story size. The corner pilasters, the square moldings at the windows and doors, and the tall stately chimneys probably all date from an expansion in the 1830s. Today, the house has balconies all around, and is called The Windjammer. The stone outcropping seen to the left in the postcard is now the edge of the town parking lot. 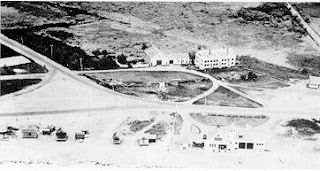 (aerial photo taken in 1929, and is from the Lane Memorial Library's excellent online archives -ed)

My editor asked if the inn had been enlarged. I only know the inn from the outside, and the photographs. I would need to look at the interior frame, layout, and mouldings to know what dated to 1802, what was later.