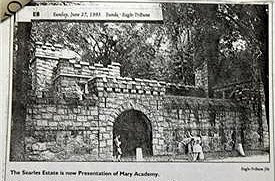 For Searles, his home was definitely his castle

Imagine a knight standing under that stone arch, before an oaken door. Looking out, he would control the space, easily barring the curious visitor. Overhead are slits for the arrows of bowmen, and above that the parapet extends out, giving the defender, protected by battlements, a good view of any intruders. The walls are well built – rubble, then cut stone topped by solid caps to keep the water out. If the first wall is breached, two more protect the king within. So what is this incredible structure doing in ? Edward F Searles, who built this wall, liked castles - he built two, this one in Methuen, and another in Windham, NH. And, he had a good reason for his walls. Mr. Searles was an interior decorator, traveling across the and around the world for interior and furniture designers, the Herter Brothers, when he met a widow, Mrs. Mark Hopkins of , and married her. She was 22 years older than he, and when she died – leaving her estate to him – the will was contested. The case, tried in in 1891, was covered daily by the national press. So, like modern day celebrities, Mr. Searles wanted his castle walls for privacy. 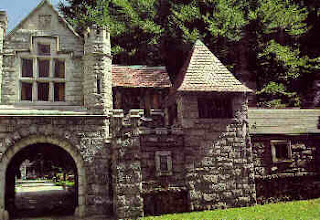 Stephen Barbin of , Mr. Searles’ biographer, adds another reason for the walls – Edward Searles’ association with The City Mission (a Catholic charitable society) in , on . He knew that many of the Italians who had recently come to could not find work. So while Mr. Searles and his architect, Henry Vaughn, designed the walls, and the master stone masons, Billy May and Alex Stone, built them, Mr. Searles hired the unemployed Italian immigrants to gather the stone (from where? - ed), enough for six miles of walls.

After Searles' death in 1920, some of the buildings became Presentation of Mary Academy, a Catholic girls' school. When I wrote this column, the school was still on site and Searles' house was occasionally open to the public