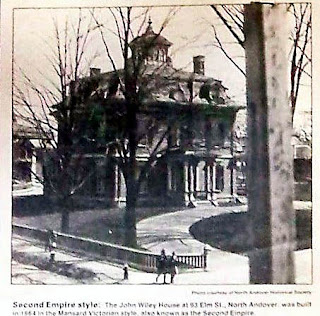 John Adams Wiley, who built this house, was a carriage maker who became president of Davis and Furber Machine Co. Made a partner in 1855, he was able to build his mansion by 1864 due to the economic boom of the Civil War.

It was the first grand house built outside the Old Center in North Andover, and was considered the most fashionable, built at Machine Shop Village among factory housing. From the flat board siding, grooved to imitate stone, to the finial (the cast iron bauble) on the top of the cupola, this was the latest style. The curve in the mansard roof is repeated on the oculus (circular window), the scalloped slate shingles and the mouldings. The arched windows of the tower are complimented by the reverse curve of the tower's roof, and the circular drive and curved stone fence complete the picture.

This is a Mansard Victorian, named for the roof which slopes steeply to allow for a full attic. The design originated in France under the reign of Napoleon III, so this style has also been called Second French Empire. Built of wood, this house was painted a dark color to suggest stone. The details of the horizontal banding at the foundation and second floor are cut to resemble stone, as are the porch railings and posts. The color unifies the house with the roof, making the whole a solid and stable master of its land.

Mr. Wiley's design worked with his site. Although the house faces Elm Street - with large windows on all sides because he was not concerned with the expense of heating large rooms with high ceilings - the working entrance (and barn, now gone) is on the protected, sunny south side of the house. Mr. Wiley also set his house above his factory, and from his tower - his bellvedere - he could look out over the mills and the Merrimack Valley.

If I were to write about this house today, I would talk about the influence of Samuel Sloan, a very popular American architect when this house was built, and about how this house has classic detailing while many others of the era use medieval 'romantic' forms.