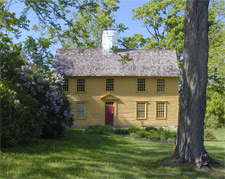 The Rev. Thomas Barnard, pastor of the North Parish church in , from 1697 to 1718, built this house in 1715. A scholar would say that Parson Barnard’s house shows the transition in colonial architecture styles from medieval to academic. What this means is that the details added to the basic structure – the hoods over the windows and the pediments over the door – were copied from older buildings, here those of the Italian Renaissance. And that the builders were influences by the theories of learned architects such as Palladio. Indeed, this house feels organized and planned as earlier homes do not. Earlier Medieval houses were utilitarian. Doors were for going in and out, windows for light and air. The inhabitants were anonymous. Here the windows and doors create the design. Their proportions and their placement in the wall give the house life. The moldings focus attention on themselves and the individual who uses them. You can easily imagine that someone inside opens the door and, stopping to feel the sunshine and enjoy the view, stands under the pediment. He is then bracketed on each side by the pilasters as if in a picture frame. The individual, of little importance in the medieval world, becomes the center of attention in the renaissance. And in this house we can see it happening.

For 200 years, people thought this to be the house of Ann Bradstreet, the poet who lived in in the 1600s. Several old histories refer to this house on as her home, and the North Andover Historical Society, now the owner, still gets calls asking for tours of the ‘Bradstreet House”. It is open to visitors Tuesday, Thursday and Saturday, from May to September, and by appointment.

(here is an interesting link to the floor plans, from a web site called Traditional New England Style Houseplans - ed)