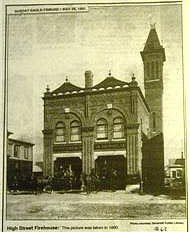 A brick is just a block clay, the right size for the human hand to hold and set with more bricks to build a wall. So see what Victorian bricklayers built when constructed matching firehouses at and in 1889. The square little bricks became round arches and mammoth columns, the flat wall at the top became a frieze simply by pulling the bricks in or pushing them out to cast a shadow and create line and pattern. Fire stations, built and paid for by the public, are good reflections of popular taste. Here is marvelous Victorian exuberance. The capitals at the springing points of the arches, the rosettes and the false pediments with urns, all of wood, balance the weight of the brick. The tower’s steep roof becomes a backdrop for its gables, finals, and weather vane. The words “column,” “arch” and “frieze” suggest classic architecture. But as can be seen here, the Victorians reinvented the forms, barely referring to the originals in and . The photograph, taken in 1890 by druggist Thomas Bailey, shows the station on .

The fire station on High Street is still there, but extensively remodeled - hard to recognize.